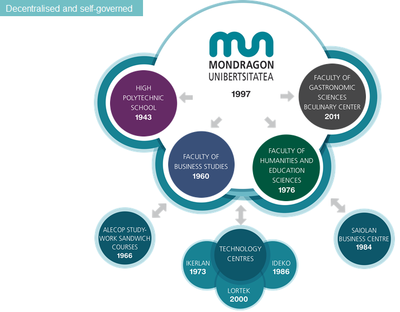 The structure of Mondragon University provides an umbrella for a robust network of support organisations, highlights of which are those specific to the area of Technology Research, IKERLAN, IDEKO and LORTEK - three internationally renowed Technology Centres that are core pillars of the University's structure, SAIOLAN Business Centre and ALECOP.

Each Faculty with a legal cooperative structure is built upon a shared project with common cooperative principles such as the priority of the work and the cooperation, democracy and solidarity

These principles are fostered through the implication of three collectives in equal participation: worker partners (owners of the cooperative with capital asset), collaborating partners (representatives from coop and non-coop companies and other institutions) and students 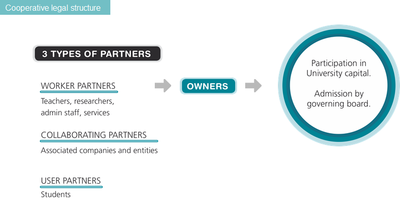 Public use, non profit making and sustainable, and belonging to the MONDRAGON Corporation

As a university with a clear social vocation we are focused on building suitable employment in society through our educational model and our particular view of research, geared to the needs of business. In building a non-profit making cooperative, we are promoting the students' economic capacity and self-finance by enabling them to combine study and work.

As a non-public organisation, our cooperatives have embodied the concept of sustainability of its own activities, where eventual positive annual results are re-invested in the cooperative and negative results are set against the capital assets of the worker partners.

Each Faculty has a legal cooperative structure and has independent decision-making bodies represented by the General Assembly (GA) and the Governing Board (GB). The everyday operations of the cooperative are run by and Executive Board (EB) comprised of a Faculty Director (Dean of the Faculty) and his/her Team Members. The Governing Board is a delegated body which has a supervisory role in the institution with monthly reports by the Executive Board.

The representatives of both the General Assembly and the Governing Board are elected democratically. 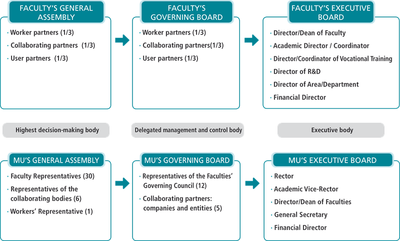 MONDRAGON UNIVERSITY is a second-degree cooperative which serves as an umbrella institution to the different Faculties. It establishes general university policies, strategic allignment and institutional representation. It also establishes some solidarity mechanisms within the primary cooperatives.